ICM – the first consulting company worldwide for starting up new ferry-cruise companies from zero, where Peo had detail knowledge of all systems onboard and on shore side operation.

He has been one of a few “key persons” for establishing two new cruise companies from zero, Delfin Cruises built 2 small cruse ships, Delfin Clipper and Delfin Caravelle in Rauma Yards and EUROWAY, ferry-/ cruise operations between Malmö and Lubeck. 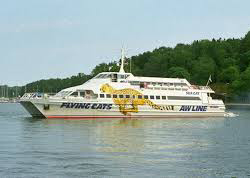 The Flying Cat, owned by AW-Lsdine started the catamaran traffic on June 5, 1988. The traffic had a few special operational problems. First the people live in Roslagen archipelago were complaining about the big swall testroying bridges, boats etc. The other problem was due to the high speed, too often the waywes was to rough so passangers got seasick. The traffice ended 18 September 1988. 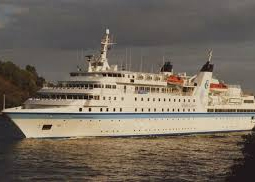 Efter the Albatross project ended for me, many around Europe were interested to start up ferry-/ cruise traffic with new concepts. First in line was the Captian Olof Holmborg together with Ölander i Kimito and Rauma Yards. The idea was to build one small  cruise ship each year to assist to save Rauma Yards with Holmborgs naval and technical team as well as with ICM system consulting IT – knowledge team should start up operations with Singapore as homeport.

The Second ship was under construction and the first one was almost sold the princess of Brunei as a private yacht. The money from Brunei was not in the right day, at the same time Sally Albatross burned in Finnboda Varv in Stockholm.  Silja Line owned Sally Albatross then took over Delfin Clipper in a week, renamed to Sally Caravelle. Both cruise ships had ice class AA so it could traffic in Arctic as well as the hottest climate, called ”Multi Cruiser”

In both ships you could Check Out via the TV in your cabin with your cabin key, 10 years before the first ship in cruise ship in caribbean. 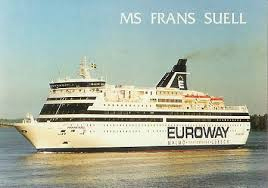 In end of 1989, Cavalli Björkman in SE Banken in Sweden talked to Karl-Johan Hagman, the former MD in Viking Line but at that time MD in AW-Line about one of his customers, Elingssen in Stockholm who, who liked to start up ferry-/ cruise traffic between Malmö and Lubeck. Cavalli told K-J Hagman that if he can buy knowledge about routines and systems that makes it possible tp get all money into the right pockets, SE Banken will lend SEK two billions. PeO had to find a few more proffessionals from the business, Atle Björkman and Harri Winter from SF Line, who just had finished the Cinderella project. Then finally Tomas Lepistö joined AS MD that was very lucky for the project.

Many unlucky things happened in a year. The same week that Euroway should launch shares so most people in Skåne should have one, the Kuwait war, started,  the Yugoslavian war started, the big bank crashed, In the yard the Serbs shot a granat trough the ship. The traffic start du to all this delay the start one year.